NASA and new news for U 2 Know part 3: World of Weirdos, I Mean, Westfields

Hey You with the feet!

Does anyone actually read this stuff?  I highly doubt it.  But still I persevere....

Part 3 of TWE new news for u 2 know will hopefully be shorter and sweeter than the last few posts. 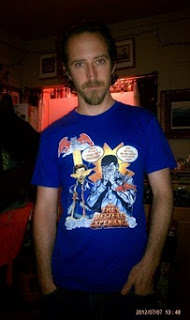 (editor's note:  that's bullshit, Phil is actually going to write a long, long story.)  Really, I'm just here trying to explain myself -- its a sort of apology for my existence, if you will.  As in, "Sorry I'm trying to make art at you like this, but my mind erupted again and I wanted to share it with someone in an effort to justify my existing at this point in time on this planet."  I assume its really just an extension of when you're a kid and you scribble a bunch of nonsense on a piece of paper and show it to your parents with the expectations that they will be simultaneously understanding, appreciative and encouraging.  Really, that's all artists are doing for the rest of their lives:  smearing the world with their own runaway compulsions and shouting aloud, dirty-faced and clammy handed "I made!"   That's all.  Art.  Is.  One long declaration of pooping.....

I don't know if Troy and I really talked much about making a t-shirt, or if I just said "I'm making a t-shirt." and Troy said "mummblbe mbuemmmble rubble oh all right."  But at any rate, it happened.  We made a t-shirt.   You can check it out for yourself if you follow this link.   And here's the long story why:

When I was in high school in the 1980s in Massachusetts, there was a store some of you may have heard of called Newbury Comics.  They said they were a comics store but it really was a music store.  Now that I think of it, as an adult I would really appreciated a comic/music store.  Well, one day I was there and I found the coolest shirt in the world.  The design on it looked like this: At the time, I had no idea that this shirt actually came from a rocknroll band.  All I knew is that someone out there understood how I felt about the world.  "A world full of weirdos."  My 15 year old self could only imagine the possibilities.  Actually, I probably already felt that I was living in a world of weirdos, but I think what I really wanted was for them to all KNOW they were as weird as they appeared to be to me.  With Weirdo Consciousness would come Inspired Weirdo Behavior.  And then the world wouldn't suck so much.  Combine that sentiment with the classic Roy Lichtenstein-esque pop art comic book design, and you have a simple yet effective homage to freaks everywhere.

When I finished college, I joined up with an avante-garde theater company.  This was a huge mistake.  I wouldn't take it back for the world, but it was probably one of the worser decisions I've made in a life of fairly poor decisions.  I'm not going to tell you why, I'm just telling you so you have the context that it was a real year of pain and suffering, but punctuated with extremely inspiring, life-changing events.  I guess it was a great/terrible decision, if I was being honest.

Somewhere in this year of inspired suffering, I apparently lent the Weirdos shirt to my friend Juniper.  She was an actor in the group, and a cool, non-judgemental person.  And definitely a weirdo.  Shit, she grew up in a teepee.  In Maine.  God, that would be cold.  I don't know exactly when or how the t-shirt lending happened, because I blocked out a lot of those memories out of a sense of self preservation, but apparently Juniper must have identified with the shirt's sentiment, coveted it, and in the end, gained possession of it.  I, apparently, went on my merry, insane way, none the wiser that this mythic piece of clothing had escaped my grasp.

Let's get in our time machine, jump into the 5th dimension, where time and space appear to be just a long, blurry sequence of events endlessly running along a flat surface, find October 22 2011, and  re-enter the 4th dimension (where you are currently reading this).  So now its October 22, 2011.  Strangely enough, and completely coincidentally (honest), that's exactly a year ago today.  Whoa.
I'm sitting in my room, wondering about that shirt.  Just like now.  Wondering what happened to it.  Wondering where that design came from.  So I looked it up on the interwebs, and it turned out it came from here:  http://scruss.com/blog/2007/03/23/that-would-be-wonderful/ 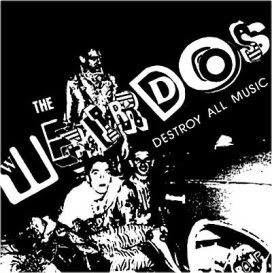 The Weirdos were a punk rock band from LA.  In order to distinguish themselves from the rest of the scene, they declared "we're not punks, we're weirdos from Hollyweird!"  I'm harboring a vague fantasy that this worked for them.  This band existed from the late seventies onward.  I bought the shirt mid 80s.  I gave it to Juniper in 1994.  Its now 2012, and as I type this I'm actually listening to the Weirdo's music for the very first time.  Its good, too!

I'm starting to feel like I'm having an out-of-body experience.

So I found the above links, posted them to the facebook with these words:  "my favorite tshirt in highschool had this on it:"

Next thing I know, I get a message from Juniper, whom I haven't spoken with in probably a decade.  She asks me what my address is, says she has something to send me.  Honestly, I have absolutely no idea what she might want to send me.  But you, the reader, know all too well.

Its a white t shirt with black ink artwork.  The material is really worn thin, not only from me wearing it for ten years, but from Juniper rocking it for another nearly 2 decades.  The sleeves are cut off - I think I did that, I honestly don't remember.  Its something I would have done in the 80s.

Its seen a lot of living, that Weirdos shirt. 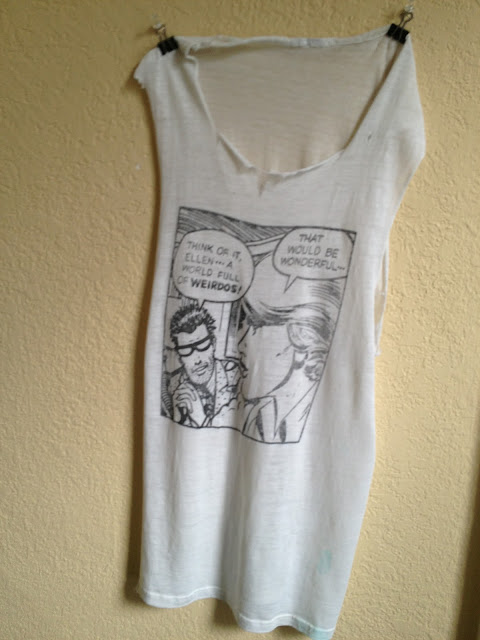 And now its hanging on my wall.  As a work of art.   Cause that's what it is.  Its a living work of art. 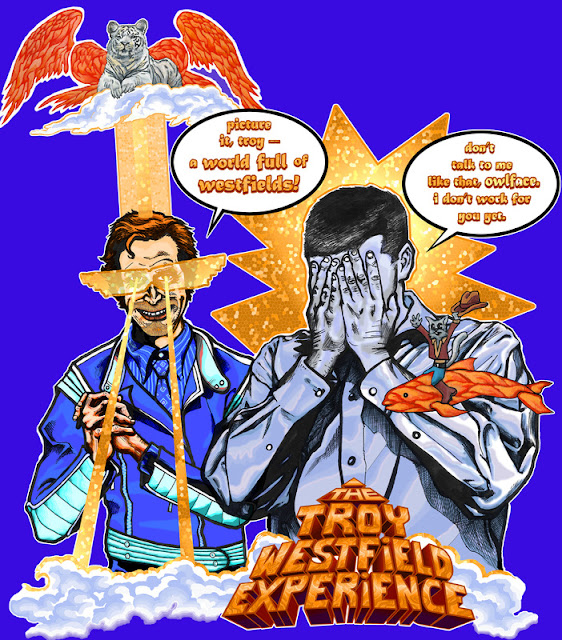 The guy covering his face is the mysterious Troy Westfield.  The words he is speaking are a Fletch quote.  I'll let him explain what that means.  You can read his explanation here.

You can get your own World of Westfields shirt if you go to our website store:
http://www.thetwex.com/-twe-store.html 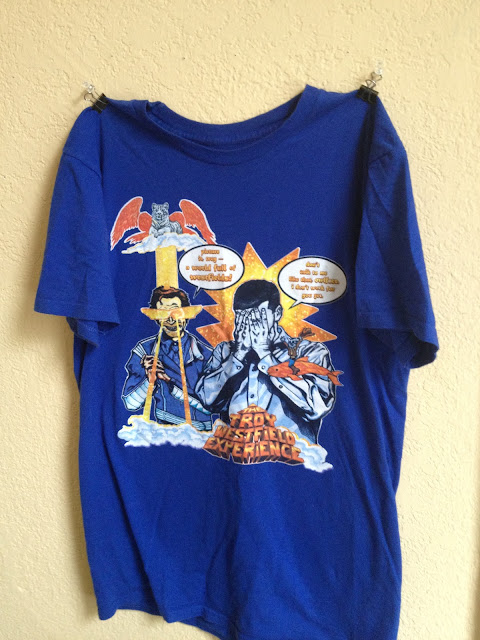 My hope:  Someone will see our shirt and buy it, and dig its weirdness as much as I dug the Weirdos shirt.  And they will wear the shit out of it, because it feels like someone understood them when no one else did.  And maybe they will give it away to a good, weird person, and forget about it for 20 years, and then get it back in the mail and hang it on their wall.  As a tribute to...well... a life lived.  And lived weird.

That would be wonderful.

Dedicated to Troy and Juniper.
Posted by The TWE at 3:52 PM 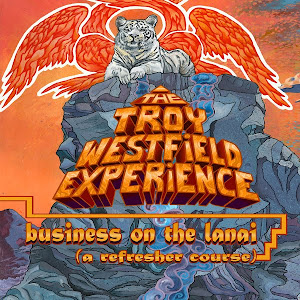